We aim to elucidate fundamental processes in evolutionary biology by taking advantage of the unusual features of ciliates, a species-rich group of microbial eukaryotes.  Current research focuses on various aspects of population genetics, molecular evolution, and mating system evolution. 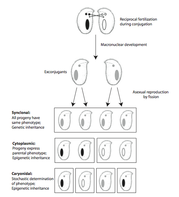 The evolution of sex and sex-related traits are topics of intense study, however, relatively little is known about these outside of multicellular organisms.  Ciliates have exceptional diversity in a variety of aspects of mating system and reproductive strategy.  We are working to continue to describe the diversity of mating strategies (Long and Zufall 2010, Phadke et al. 2014), assess the effects of these on sex ratio (Paixão et al. 2011) and mate choice (Phadke et al. 2012), and uncover the mechanisms driving this diversification (Phadke and Zufall 2009).

Ciliates are famous for their 'genome duality.'  In a single cell, they maintain two distinct types of nuclei that function as the germline and soma respectively.  In addition, the somatic genome undergoes massive developmental genome reorganization (Zufall et al. 2005).  We have demonstrated that this nuclear architecture has important consequences for molecular evolution (Zufall et al. 2006, Zufall et al. 2012).  We are currently testing the hypothesis that the nuclear and genome architecture in Tetrahymena thermophila results in increased evolvability in this lineage.

Rates and fitness consequences of mutation

Mutations are the ultimate source of all genetic variation, and the cause of many human diseases.  The separation of germline and somatic function within a single ciliate allow us to study spontaneous mutation in the absence of selection on new mutations.  We are using mutation accumulation experiments in T. thermophila to determine the rates and fitness consequences of mutation (Long et al. 2013).
Powered by